“Naaman, commander of the army of the king of Syria, was a great man with his master and in high favor, because by him the Lord had given victory to Syria. He was a mighty man of valor, but he was a leper. Now the Syrians on one of their raids had carried off a little girl from the land of Israel, and she worked in the service of Naaman’s wife. She said to her mistress, ‘Would that my lord were with the prophet who is in Samaria! He would cure him of his leprosy.’

“So Naaman came with his horses and chariots and stood at the door of Elisha’s house. And Elisha sent a messenger to him, saying, ‘Go and wash in the Jordan seven times, and your flesh shall be restored, and you shall be clean.’ But Naaman was angry.., saying, ‘Behold, I thought that he would surely come out to me and stand and call upon the name of the Lord his God, and wave his hand over the place and cure the leper.  Are not the rivers of Damascus better than all the waters of Israel? Could I not wash in them and be clean?’ So he turned and went away in a rage. But his servants came near and said to him, ‘My father, it is a great word the prophet has spoken to you; will you not do it? Has he actually said to you, “Wash, and be clean”? So he went down and dipped himself seven times in the Jordan, according to the word of the man of God, and his flesh was restored like the flesh of a little child, and he was clean. Then he returned to the man of God,.. and he came and stood before him. And he said, ‘Behold, I know that there is no God in all the earth but in Israel.'” 2 Kings 5:1-3,9-15

Namaan had all the trappings of worldly success, but underneath the decorated uniform of valor, on the surface of his body, was diseased skin. The nameless servant girl had none of the visual finery and public aplomb of her mistress’ husband, but she was adorned with confidence in God’s grace and power; on the interior she was a stalwart of compassion and faith. She lived by assurance in the unseen, the rules of her Sovereign’s supernatural working through His prophet Elisha, and willingly reached into the life of one consumed with notoriety and pomp to introduce her God. How beautiful is God’s clash to unite these two worlds! Only in submitting to the Lord’s prescribed ‘wash,’ prodded on by ‘mere servants,’ was Namaan able to know Him. (Hebrews 11:1) 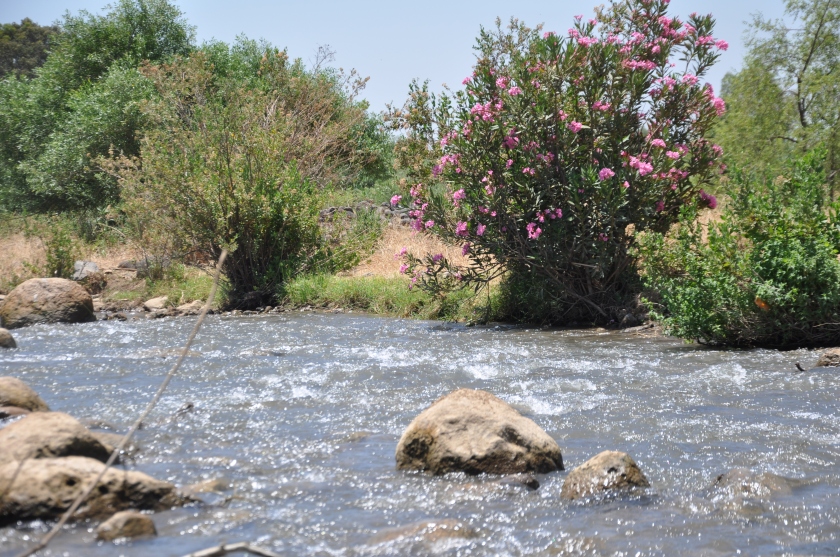 We care so much for our skin. We fret and fuss over how we appear, how superficial credentials, and what we do, will look to others, often to the neglect of the inner man. Do I spend more attention and time on glossing my exterior than surveying and purifying my interior? Do I consider myself above God’s required Jordans, because they lack my desired social status? Where am I settling for surface when God wants to go deep? (1 Samuel 16:7)

Good Father, plunge through my skin to tend the matters of my heart, that I pulse with Your love, and identify with the praise of Your glory.